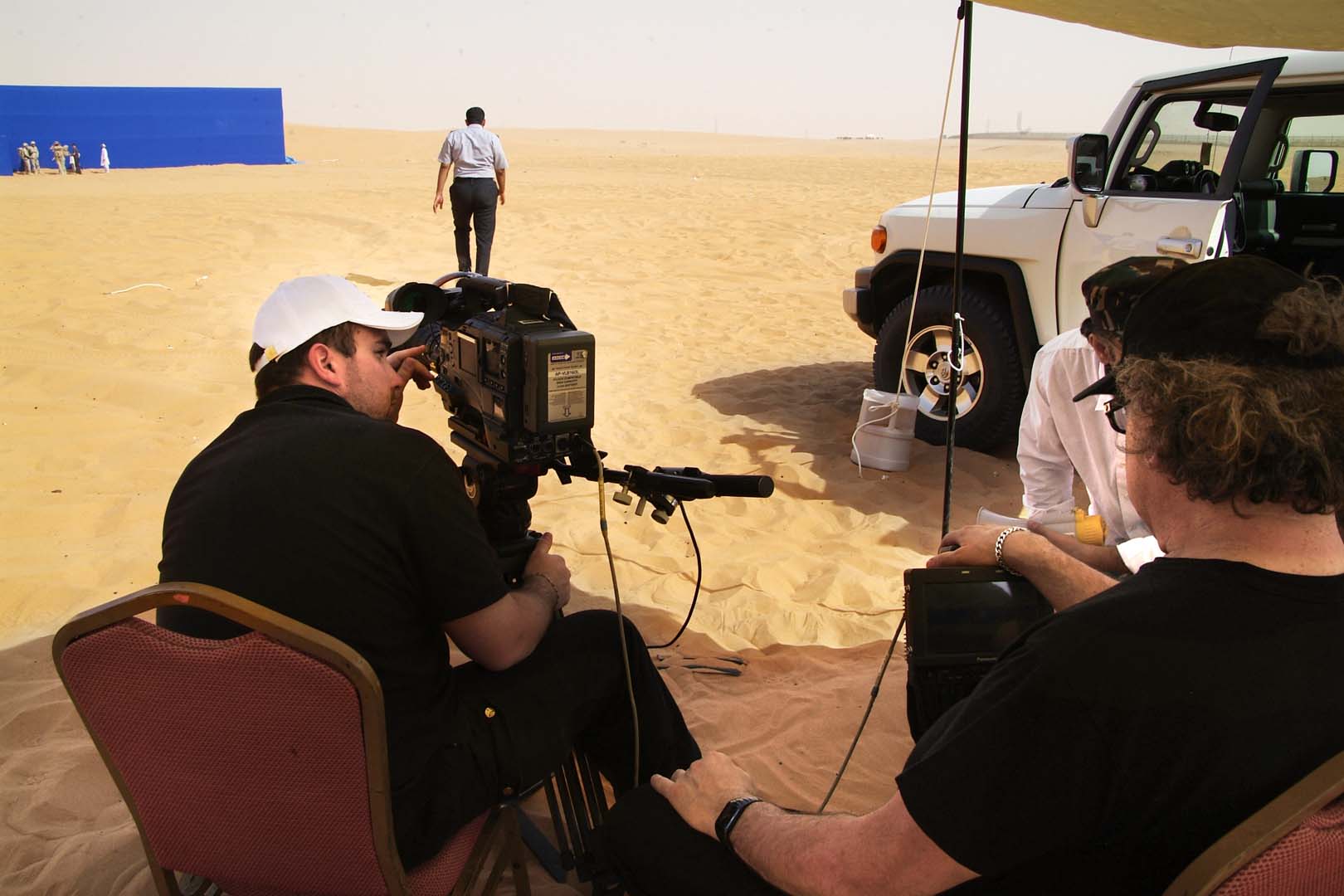 A spectacular multimedia musical show opening the Al Janadriyah Heritage and Cultural Festival was staged in front of His Royal Majesty King Abdallah of Saudi Arabia on a 1,400 sq.m. (4,593 sq.ft.) stage, custom-built for the occasion. It was broadcast to millions of viewers by MBC.
The operetta, entitled Wehdat Watan (the Unity of Our Country), was written by the great Saudi poet, Sari. During the show, the enormous set (40 metres wide, 35 deep and 12 high) hosted live camels and sheep, encampments, and military vehicles. There were also sand dunes, an oasis with pools and waterfalls and several groups of palms.
An enormous hawk (16′ high with a 48′ wingspan) appeared from upstage for the dramatic finale.
Lighting and Virtual Scenery
Marco Incagnoli, the event’s lighting designer, with 25 years’ experience in the television world, explains:
“The correct balance between theatrical lighting and television photography is the result of experience with shows on which lighting is no longer only at the service of the show, but is itself a show.”
Sergio Metalli is an acknowledged master of the art of virtual scenography and his work has been acclaimed by audiences in prestigious theatres and other venues worldwide.
For the Festival, using a Panasonic AJ-HPX3000 camcorder, the Ideogamma team shot HD video footage in the desert, including soldiers and tanks, and used a huge (35×5 mt) blue screen to shoot soldiers jumping down from a helicopter and a scene with women’s songs. They also toured Arabia, shooting and photographing major monuments and urban areas, including the famous Mada’in Saleh archaeological site in the mountainous north-eastern region of Hijaz. Metalli explains: “The soldiers, who jumped down from a platform constructed specially for use with the blue screen, had to be filmed in such a way that, during the show, it seemed that they were actually jumping from a helicopter flying at the same height, and were in scale with the soldiers on stage. The helicopters in the video were filmed and then digitally ‘re-built’ in 3D by our expert graphic team.”
Metalli and his technicians also fed video content to three modular 16mm pitch LED screens: two vertical 7.5’x33′ screens and a horizontal 75.5’x6′ one. The three screens formed a sort of frame around the set.
Metalli’s son, Mattia, was in charge of post-production and special effects.
After the huge event, Metalli Sr. enthused, “As well as the technical challenges involved and successfully overcome to achieve the show’s impressive all-round results, Janadriyah was also wonderful from a human point of view, as the spectacle was put together by a really mixed team, with Saudi, Italian, Lebanese, Tunisian, and American professionals working side by side – a wonderful experience!”