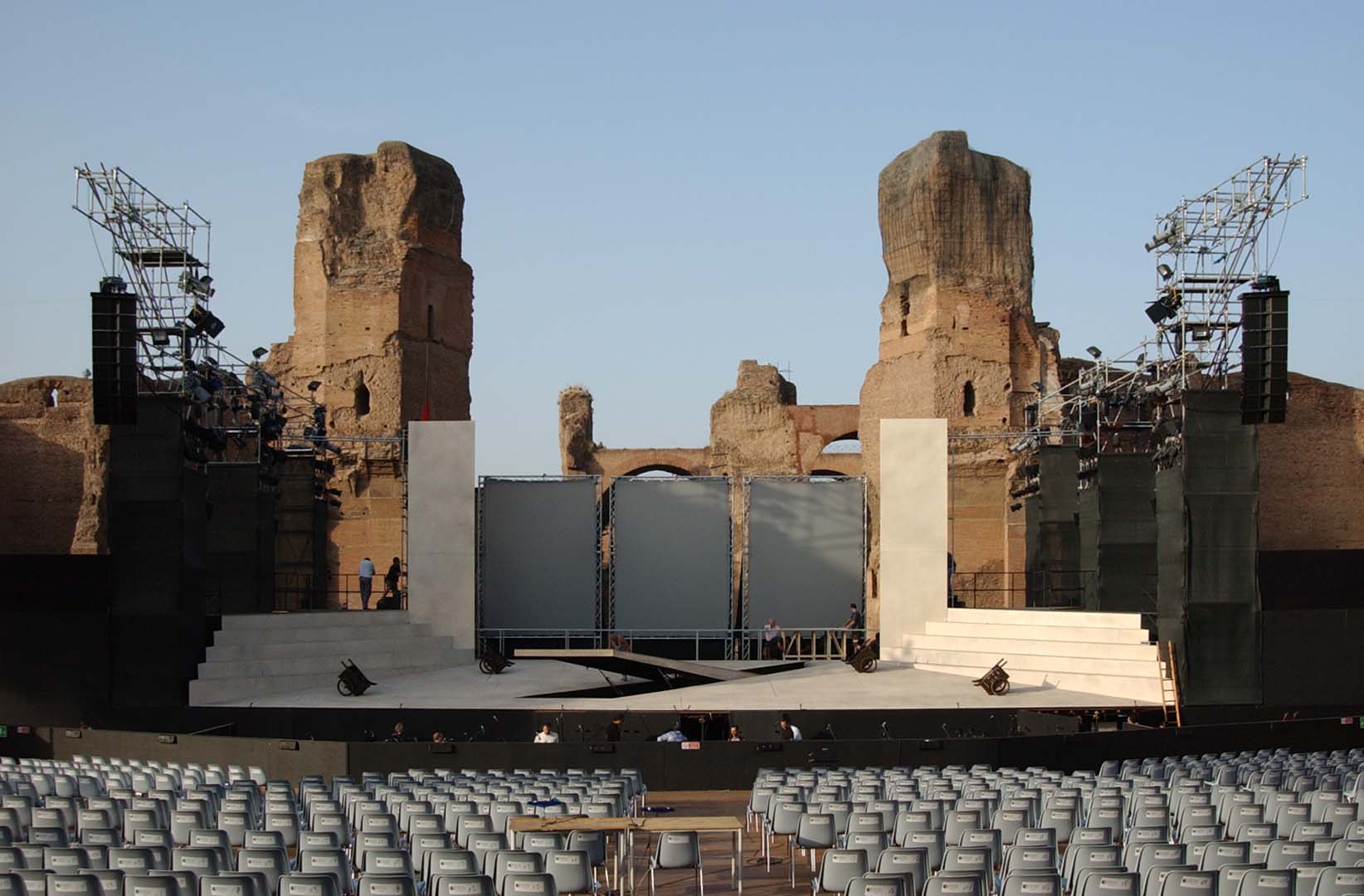 Carmen at the Terme di Caracalla

Preparation are under way for Georges Bizet’s Carmen, being staged on Thursday 24th July for the summer season of Rome’s Teatro dell’Opera, an unusual production on its world premiere, in which projections will play a preponderant role.
Although at his first Carmen, director Francesco Esposito has already directed a hundred and eleven productions, and explains, “Evocative images will be used to suggest this character’s inner life in an anti-conventional interpretation.
On the three giant screens, 7 metres long and 3.75 high, digitally created abstract figures move continually with pictorial effects, immersed in spectacular lighting. They were created by projection designer Sergio Metalli, based among other things, on photographs of the stage costumes realized by stylist Alberta Ferretti: orange, red and amber coloured skirts worn by the women on stage.”
Esposito says, “The screens will also move parallel to the proscenium, enabling spectators to occasionally see the illuminated ruins of the imperial terme, to the point that they become part of the set, as will happen in the seduction scene.“
Although maintaining Sevillian characteristics, the costumes designed by Alberta Ferretti will not be strictly dated, but will have a timeless style, as the director himself describes it.
“They are clothes that speak the symbolic language of colours, in an unusual alternation of red, white and orange in the costumes of the diabolic seductive Carmen. In acts three and four”, continues Esposito, “the clothes lose their colour, until they end up white, all one with the set. But in the final ‘duel’ between Carmen, whom I see as the ‘toreador’ and seduced naive Don Josè, who for her is the victim to ‘matar’, the colour will be blood red.”
For the new production, which marks opera’s return to Caracalla after ten years, reviving a tradition born in 1937, Michel Plasson will be on the podium, conducting the Orchestra and Chorus of Rome’s Teatro dell’Opera.
In the cast, Sonia Ganassi and Nancy Herrera will alternate in the title role, Alberto Cupido and Carl Tanner in that of Don Josè and Mario Malagnini and Ildebrando D’Arcangelo in that of the toreador Escamillo, while Elizabeth Norberg-Schulz and Raffaella Angeletti perform the part of Micaela.
To highlight the dynamism of the opera’s chorus scenes, the Theatre’s Corps de ballet will perform choreographic pieces by Alfonso Paganini.