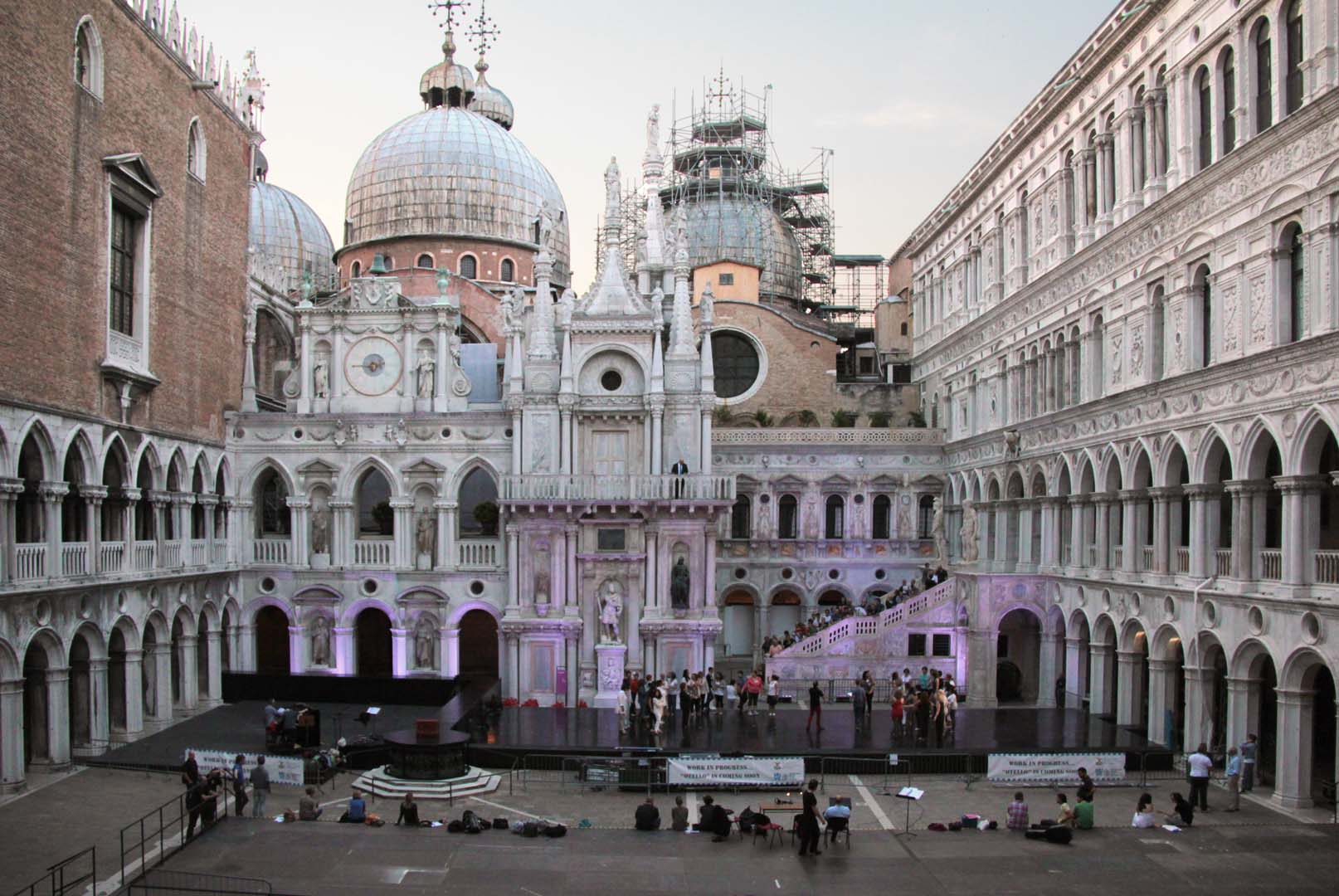 Two Rimini masters on the stage of “Otello”

Great opera music at the Doge’s Palace in Venice

Reviving the tradition of the historical performances of Otello in the sixties with Italian tenor Mario del Monaco, thanks to a collaboration with Venice’s Department for Architectural and Landscape Assets and with the Venetian Civic Museums Foundation, this year operatic music returned to the Courtyard of the Palazzo Ducale, with a production of Otello staged on the bicentenary of Verdi’s birth as the key event of the festival “The Spirit of the Music of Venice”.
The production, tailor-made for this extraordinary location, was a new version of the Otello originally created by director Francesco Micheli to open the opera season at Venice’s Gran Teatro La Fenice.
Under Micheli’s direction, the settings of this version of the Verdi masterpiece were entrusted to scenographer Edoardo Sanchi (also set designer for the version at La Fenice and later in Japan), and projection designer Sergio Metalli – two worldwide ambassadors of Italian creative fantasy.
Micheli explains: “The courtyard is a natural set in itself, but I was pleased that key elements of Edoardo’s design for the La Fenice production were kept. We added scenic elements that helped the audience understand the story of the Moorish captain who manages to survive a shipwreck at sea, but who loses his soul in jealousy and desperation.”
As well as teaching scenography at the Venice Academy of Fine Arts, Sanchi has worked as a scenographer in the best-known Italian and European theatres. His creativity has been applauded by Chinese and Australian audience and he has also held set design master-classes at Melbourne University.
Sanchi comments: “The idea was to create a glossy black stage which appeared to be a mirror of water reflecting the white architecture of the building. On this ‘water’ we installed Venice’s typical high-tide walkways to raise the artists, who sang on islands floating in the black ‘sea’.”
With nine powerful video projectors, Metalli reproduced positive and negative versions, according to the scenes, of a breathtaking star-studded high-definition sky, based on maps by seventeenth century astronomer Johannes Hevelius, and animated the façades of the courtyard with the creatures and symbols of the constellations and enormous lions, the symbol of the ancient Republic of Venice.
The huge gold ship sailing on the (virtual) waves of the sea was entirely created for Otello at Metalli’s Ideogamma studios in Rimini and was a fantastic cross between a galley and a galleon. Models of this same ship were carried on stage by members of the chorus of La Fenice, directed by world-famous Korean conductor Myung-Whun Chung, as was the theatre’s 40-piece orchestra and the treble voice choir of the Piccoli Cantori Veneziani.